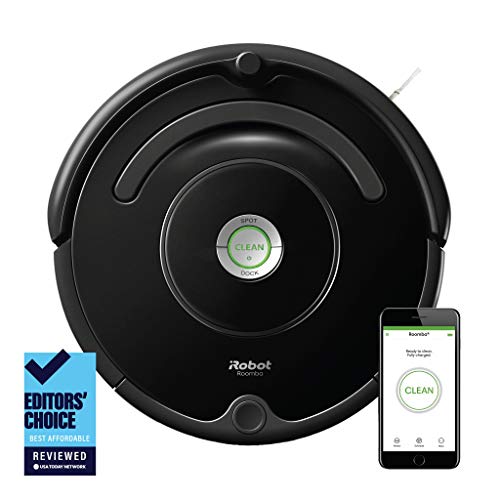 The Roomba 652 by iRobot is in the middle of the 600 Series. The 600 Series is the most basic collection of robots offered with the Roomba name. They offer great value, rugged build, a design proven over 25 years to work well and a host of satisfied customers.

You Need a Robot

If you really want a spotless house, you have to vacuum at least a couple of days per week. Even in the best of circumstances, there goes at least an hour a week you could spend dusting, doing laundry or just sitting there like a bump on a log while you consider the meaning of life. That amount of time adds up to a minimum of two days per year gone from your life. It’s never coming back. If you want your home cleaner than average, it’s inevitable that you’re going to watch some things in life pass you by.

The Roomba 652 can give you back most of that time. Instead of an hour or two a couple of times a week, a typical robot vacuum can spend an hour or more on your floors every day and deliver great results. You may still want to touch up from time to time, especially while the robot is first learning your home’s floor plan. However, that seems a small price to pay to me, considering the amount of time a robotic vacuum can free up.

When you’re looking for your robotic sidekick, keep in mind that there are certain features that are considered standard after nearly three decades of production. You should insist on certain minimum features no matter what the brand or the price level of a given robotic vacuum. 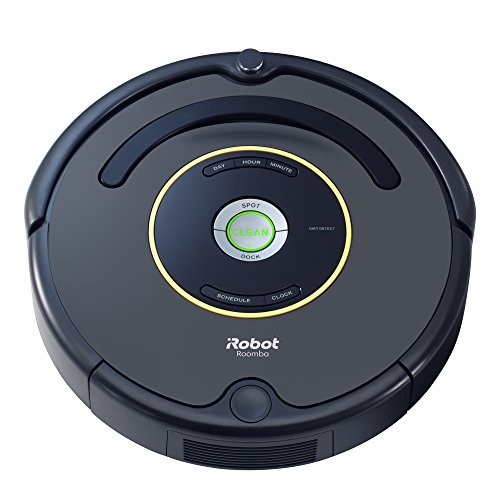 When I unpacked the 652, I thought there was a mistake because, besides the 652’s glossy finish and the 650’s satin finish, I couldn’t see a single difference. Calling iRobot’s customer service, I learned there are three differences between the 650 and the 652.

First, the 651 brought an upgraded battery from nickel-metal composition to lithium-ion technology. Second, the iRobot customer service agent said the 652 model number is from upgrading the dirt sensor to infrared sensors as well as audio technology. The third difference is the 650 includes the Virtual Wall and the 652 doesn’t.

Features and Benefits of the Roomba 652

The Roomba 652 has all the same features as the 650. From my experience, it’s a lot easier to find the Roomba 650 in online marketplaces than it is to find the 652. You’re trading the nicer battery and better sensor on the 652 for the Virtual Wall on the 650 to keep the price the same.

The Roomba 652 has the same all-black look of the 600 Series except that it’s glossy and the rest of the series has a matte or satin finish. Like the rest of the Roomba collection, there’s a handle that folds out for moving the robot, the big “Clean” button in the center and some smaller buttons nearby. The front of the vacuum is equipped with the same rubber impact bumper as the 650. To access the filter, you use an access hatch on the side of the robot.

The Auto-Adjust Cleaning Head is able to compensate for floor level changes like door thresholds, large area rugs, and carpet edges. When it climbs a bump or the edge of a carpet, the cleaning assembly is able to automatically raise and readjust to the new flor height once the transition is complete. Going the other way, the robot will lower the brush and vacuum head to reach a hard floor surface like tile, wood or concrete.

Some users have reported problems with all robotic vacuums adjusting properly on 1970s-style long shag carpeting. If you’re wanting to use a robot on that surface, you might be out of luck. The 652 certainly isn’t the right choice for that job. The bristle brushes can be pretty hungry around long hair and strings, so it follows logically that shag carpet will be a problem.

Without a wireless app, most robotic vacuums are only able to give basic on-and-off service. The Roomba 652 can be scheduled for 7 different start times. Of course, the basic idea is for the robot to clean once per day at a particular time. However, you can schedule each day for a different time.

It’s also possible to space out the scheduled cleaning sessions to account for recharging time and run the Roomba 652 for seven straight sessions. I’m not sure why you would want to run your vacuum in one long overnight frenzy, but at least you know you can do it if you spill a 50-pound sack of flour.

I don’t personally consider a lack of wireless connection or remote operation to be a big deal. I’m perfectly fine walking across the room to push the “Clean” button. If you’ve taken the time to set up a daily cleaning schedule with the programming buttons on top, the only time you have to touch the robot is to help it when it’s stuck or to empty the cleaning bin. Every robotic vacuum needs periodic maintenance, so that issue really isn’t any different whether the robot is connected or not.

Featured on every vacuum in the Roomba collection, the 3-Stage Cleaning System is designed from the start to clean pet hair better than just about anything else. The system consists of a couple of counter-rotating brushes that loosen surface dirt and reach down into the carpet to brush debris out.

A powerful suction system puts the dirt in the dustbin. An ingenious multi-armed little brush like a helicopter rotor spins at one corner of the robot, sweeping debris and dust bunnies into the suction.

When you start looking through product reviews at the rate that I do, you quickly start noticing some trends. The single most prominent point of praise I encounter when checking Roomba’s performance is how well these machines remove pet hair from floors.

This is true across the web regardless of the Roomba model, which is significant because the 600 Series, including the 652 use bristle-type brushes in the 3-Stage Cleaning System. 800 Series and higher Roomba vacuums are equipped with rubber brushes that have tire-tread-like patterns molded into them.

They are known for superior cleaning, but cost more because they require a more powerful motor. Owners are impressed no matter which technology is equipped and I commend the iRobot engineers for their great job on this design.

The lithium-ion battery shipped with the Roomba 652 delivers 60 minutes of operation on two-to-three-hour charging time. It is slightly more powerful than the previous battery with a 2600mAh rating compared to the old battery’s 2200mAh rating. Even so, the run time is the same with both batteries. The charging time is the same, too.

Like the Roomba 650, the Roomba 652 returns to its recharging dock automatically when the battery is discharged to a certain level. Because the Home Base charging dock uses an infrared beam, there needs to be a clear line of sight for the robot to find it. Once the robot’s battery gets low, it heads back to the place where it started out.

It looks for the infrared beam to guide it into the dock. If you are using the optional Virtual Wall barriers, their infrared beams can interfere with the Home Base signal. Therefore, iRobot recommends placing the barriers a good distance from the Home Base charging station.

Although the machine will return to charge itself, it won’t go back to its vacuuming until you push the “Clean” button manually or the scheduler starts it on the next scheduled run. The 600 Series is the Roomba entry-level line, so it doesn’t offer a charge-and-resume feature.

I spend time every single day voraciously reading every owner-report I can to find out how these robots perform in real life. The reports on Roomba 652 models are out there, but are far less numerous than those for the 650. Given the nearly identical nature of both machines, I’ve included the reports I read for the 650 into this summary.

Owners report satisfaction levels of 80-90 percent on a consistent basis. The machine’s reliability was praised quite often. Another favorite positive among owners was the 650/652’s ease of use. I’ve already mentioned how often owners remark on the Roomba line’s ability to clean pet hair.

There are a few other robots worth considering if you have problems fitting the Roomba 652 into the budget or want a few more features in the same price range. In this Roomba 652 review, we’re offering three other ideas to consider, including one for those of you who have their hearts set on a Roomba machine.

The Roomba 675 and 652 share the Roomba 650 platform, meaning the same level of performance. The 675 costs slightly more, but brings Smart Home voice control and Wi-Fi connectivity to the table. Using the Smart Home mobile app, you can monitor your robot’s progress, remotely schedule and start cleaning sessions and receive notifications from the robot. You’ll have a better battery and better navigation even without using wireless technology. 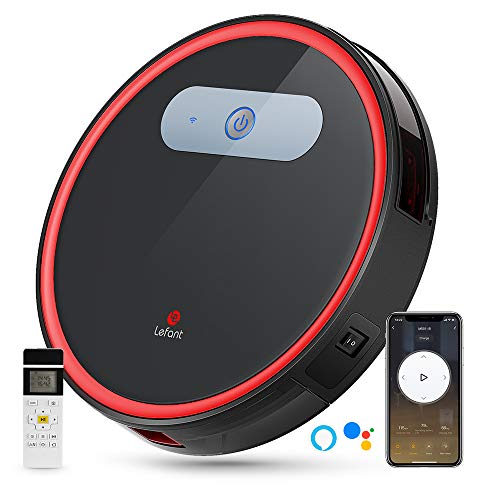 The Lefant M501-B offers voice control and a mobile app for scheduling. It’s got its own remote control with an LED screen. One interesting feature with the M501-B is it has adjustable suction power levels. You can set it to high suction for surfaces like carpet, and a lower airflow on a hard floor. It’s impressively high-tech looking with colorful stripes on a slick black body. Its pricing falls between the Roomba 650 and the Roomba 675. 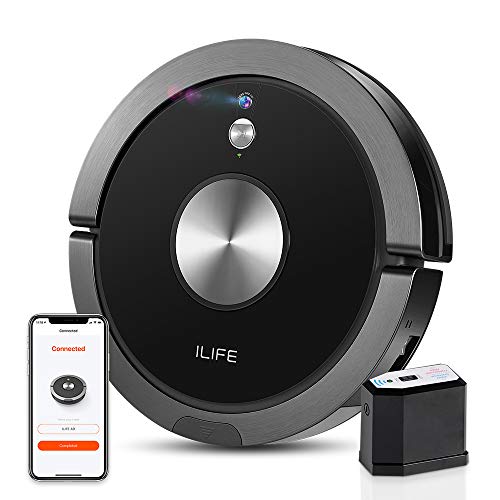 The ILIFE A9 uses a different type of navigation than the Roomba 600 series, cleaning in straight lines instead of random patterns. It’s also got its own virtual wall system called the Electrowall. Also featuring Wi-Fi connectivity and a mobile app that lets you operate this robot through voice command on Google Assistant and Alexa systems, this one costs slightly more than the Roomba 652. Unlike the Roomba vacuums, the ILIFE A9 doesn’t come with a charging dock. It uses a normal wall charger with a USB port.

The Roomba 652 has a great reputation among its owners. It’s got seven-day scheduling and the Roomba brand behind it. I feel that the Roomba 650 is a better value with the Virtual Wall barrier as part of the package. It’s simple to operate and reasonably priced. However, Wi-Fi connectivity and similar performance are available at a lower price, even if you give up the seven-day scheduling. If you simply must have a Roomba, I recommend buying the 675.

Although the ILIFE A9 is recommended by owners as a good robot, it doesn’t offer anything you can’t get from a Roomba robot at the same price. Because the Lefant M501-B comes with its own remote and features adjustable suction power levels, we’d recommend it over the ILIFE A9 as the best Roomba alternative.

What Is the Best Robot Vacuum for Thick Carpet? [TOP 12]

PrevPreviousRoomba 614 Review: Should You Buy This Robot Vacuum in 2020?
NextRoomba 650 Review: Do We Still Recommend It in 2020?Next
Menu