The Roomba 614 is iRobot’s most basic vacuum. Wondering how this no-frills robotic vacuum stacks up against the rest of the market, I decided a Roomba 614 review is the best way to find out. A robot’s value doesn’t necessarily depend on the length of its feature list. Value is where you find it. Is the Roomba 614 a diamond in the rough?

Things to Think About

Using a robotic vacuum is one of the best ways to reduce your daily workload. Offload the daily time spent vacuuming to a robot helper. It will save you lots of hours and make it much easier to keep your home pleasantly clean. You can save yourself the dreary chore of wrestling an upright around in the evening when you’re tired from work. Even if you want to vacuum with a regular machine, a robot will let you do it less often and at more convenient times.

If all you want is simplicity in a complicated life, push the big “Clean” button and lean back. The Roomba 614 will map your floorplan and vacuum your floors, adapting to changes like chairs that move around.

If you have your heart set on hooking up to the robot using Wi-Fi, scheduling it remotely or giving it voice commands via digital assistant, you need to look at higher-level robots than the Roomba 614. This is not a sophisticated model as far as robotic vacuums go.

When you’re out shopping for a robotic vacuum, there are a few things you should keep in mind. After nearly three decades of manufacturing, this industry has matured to the point where almost all of these machines have certain entry-level features regardless of maker. These are some of the industry-standard basic features to look for in every modern vacuum. Nobody who’s living in the 21st century should be living without these minimum attributes.

The Roomba 614 is a basic robotic vacuum without a long list of sensational features. For some people, this is an advantage, because there’s no real setup involved and a lot less to think about. I can’t disagree with that. Life is too complicated already.

Characteristics of the Roomba 614

The Roomba 614 is the most inexpensive and least complex model offered in the entire Roomba collection. That means it’s the most basic model in the company’s most basic series. One positive is that it costs the least to get an actual Roomba-branded machine into your house. It’s also the easiest Roomba model to operate.

Based on the Roomba 650, the 614 is positioned as the value leader in iRobot’s entry-level Roomba 600 Series. The 614 has a glossy black finish, unlike the satin black finish found on the rest of the 600 Series. There’s also an impact-sensing rubber bumper on the front like the rest of the series along with the usual fold-out carrying handle. The filter is serviced from the side.

The Roomba 614 should be lighter, run cooler and be more reliable than more expensive models because there are fewer sensors and electronics than normal. It’s much less complex under the hood than most other robotic vacuums. That makes for less to go wrong while doing its job. It also means that the time this robot spent in the factory was focused more on assembly and quality control than testing complex components.

Like every other Roomba vacuum, the 614 comes with iRobot’s patented 3-Stage Cleaning System. It uses two rotating bristle brushes designed for multiple surfaces. Characteristics like bristle density and distribution pattern are different on each brush. The powerful AeroVac suction removes ground-in dirt along with the loose particles extracted by the brushes.

Special sensors direct the Roomba 614’s Auto-Adjust Cleaning Head to match floor conditions automatically. The robot does this by adjusting the level of the cleaning head to match the height of the floor surface. This means the Roomba 614 will compensate for carpet edging, door thresholds, ramps and transition points between different types of tile or hardwood flooring.

The lithium-ion battery shipped with the Roomba 614 is capable of 90 minutes of operation on hard floors. Coupled with the usual Roomba two-hour charge time, the Roomba 614 might actually have the most efficient power usage of any Roomba robot. The 614 probably has a longer than normal run time because it doesn’t have to power feature sets like the more expensive robots. That means more battery reserve is left to actually power the vacuum.

The 614 uses a specially-designed edge brush with a 27-degree sweep pattern to clean at the bases of walls. This brush operates mostly parallel with the floor, spinning around and sweeping the edge where the wall meets the floor. The spinning brush sweeps debris from along the wall under the machine, where the 3-Stage Cleaning System sucks that stuff into the bin.

The Roomba 600 Series uses the iAdapt Navigation Technology. This is the first generation of iRobot’s Roomba navigation system. It uses a responsive algorithm to adapt as it cleans. The iAdapt 1.0 machines work in a random pattern, mapping the room dimensions as it bumps into limits like furniture and walls.

When they find an obstacle, they mark the location and go in a different direction until they find a clear way around. A Roomba iAdapt 1.0 robot will continually move and change direction in this manner until the entire floor has been covered or the battery gets low, when it heads for its recharger.

If the robot didn’t start at the Home Base dock, it will return to its starting position and shut down even if the Home Base is close by. If the robot isn’t able to find the infrared signal, it won’t dock. It will shut down in the vicinity of the charging station.

Although a lot of people consider the lack of mobile app and programming functions to be disadvantages, I believe there’s something to be said for simplicity. All it takes to vacuum your home automatically is the push of a button. The robot leaves its dock, maps and cleans the room and returns to charge all by itself.

In a world where I have to program my toaster, my microwave, my television, refrigerator, thermostat and more, I love the idea of just pushing the “Clean” button, pouring myself a stiff drink and relaxing to some soft jazz. No muss, no fuss, no decisions on dates and times. Taking a load off my mind is worth just as much to me as taking a load off my back.

Probably the simplest vacuum on the market to operate, all you do is charge the battery, press “Clean” and empty the dust bin when it’s done. You can’t get a robotic vacuum that’s any simpler to operate. There’s no remote, no software and no programming. Here in the future, it’s actually easier to command your robot to vacuum the house than it is to record a TV show.

The greatest authority on the Roomba 614 is the buying public. So I looked around a little to see what the word on the street was. It turns out Roomba 614 owners love their vacuums. Most of the owner reports mentioned how well it removed pet hair. I have found this is a pretty common claim no matter which Roomba is being discussed.

There were also some users who had been using this model for years and mentioned its long-term reliability. Many owners mentioned the same point I made above, that the thing they like the most about the Roomba 614 is the simplicity of this vacuum.

The Roomba 614 isn’t the only choice for a robotic vacuum in the entry-level price range. There are other brands with models that also target this price range, including another Roomba model from iRobot. 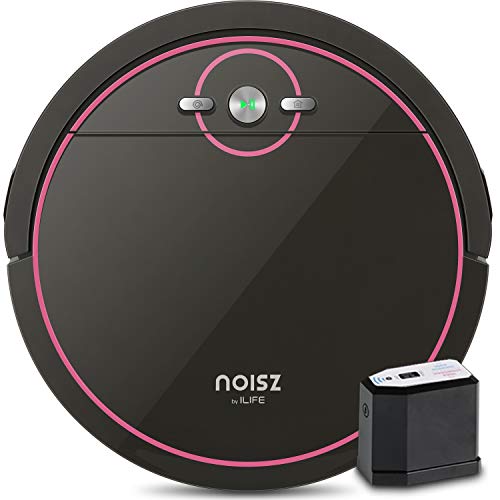 Unlike the Roomba 614, the Noisz-ILIFE-S5 offers scheduling and a Virtual Barrier system to define its cleaning area. The lithium-ion battery gives 100 minutes of run time, even more than the Roomba 614. Some customers say it has a hard time working on thick carpet but does a great job on other surfaces.

It has a slick, technological appearance with a red stripe around the rim. This robot would look great with any modern home décor.

Also slightly less than the Roomba 614, the Eufy BoostIQ 11S has a 2.8-inch profile, compared to the Roomba’s 3.7 inches. With nearly an inch less height, this robot can fit under cabinets, beds, and sofas that the Roomba 614 just can’t get beneath.

The Eufy BoostIQ RoboVac 11S features three filters, returns to its charger and offers a 100-minute run time, which is over 10 percent longer than the 614. Following the same simplicity premise as the Roomba, this robot doesn’t offer a wireless connection and doesn’t have a scheduling option.

The Roomba 675 and 614 are both based on the Roomba 650 and share many internal features. The 675 usually costs more, but offers Wi-Fi and voice control through Alexis and Google Assistant. The Smart Home mobile app gives you scheduling, monitoring and notification capabilities. Because the two robots have the same 650 roots and similar user satisfaction ratings, the 675 is like having the Roomba 614 with better stuff.

You can also read our other Roomba 600 Series comparisons here:

The Roomba 614 not only cleans for you, but it also does so with minimum effort. Push “Clean” and it goes to work. Beyond that, it’s Roomba’s best-priced model. If simplicity and minimum fuss are the goals, the Eufy BoostIQ RoboVac 11S has good reviews, has an inch lower profile than the 614 and is in the same price range.

On the flip side of the question, the Roomba 675 is basically the same robot with scheduling, the second-generation navigation system, the wireless connection, and a mobile app.

With this Roomba 614 review, I have to recommend you just run the Roomba 675 manually and forget all that complicated stuff if that’s what you want. Then you have the 614’s simplicity with the 675’s better navigation. If you decide you want to run the wireless later, you can always turn it on when that day arrives. With the Roomba 614, that’s simply not an option. For these reasons, I think you should pony up for the Roomba 675. You can take a closer look at the Roomba 675 here.

For more information about the Roomba 600 Series, check out our reviews below: